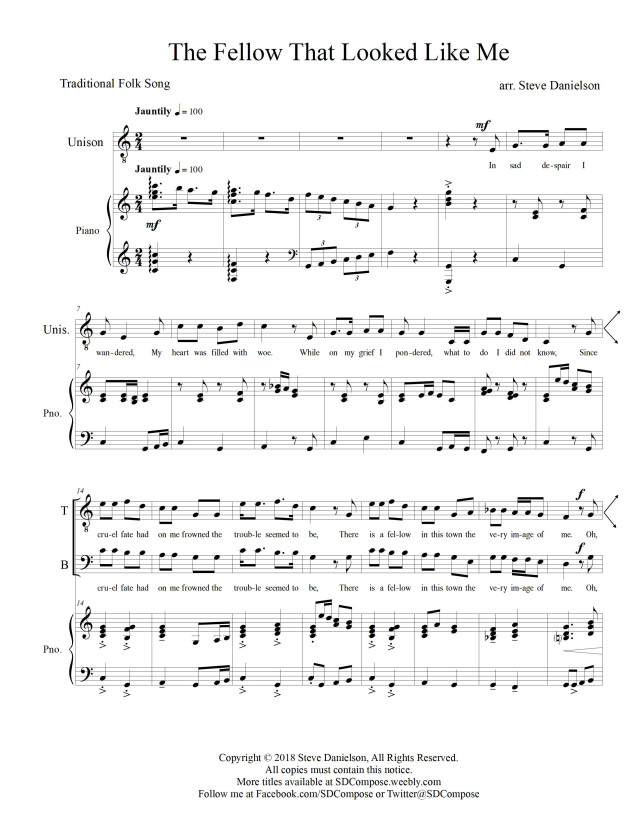 The Fellow That Looked Like Me is a folk song remembered and recorded by Mrs. Carrie Grover. She was raised surrounded by song from both her mother and father. In a time when electronics were not a distraction, song was a means of entertainment and story telling. This song is from her father's side, from either Wales or England. In 1973, she published a collection of 140 of the songs from her memory in a volume called A Heritage of Songs. The book is currently out of print, but efforts are being made to transcribe each tune and make them available in the public domain.

Mrs. Grover states the following in the introduction to A Heritage of Songs: "The singing of songs played a large part in the daily lives of my family as no doubt it did in the lives of other families of that time. My grandmother sang at her spinning wheel and at her loom...I have heard my oldest brother say that she would spin and sing all day and never sing the same song twice. He said she knew more songs than anyone he ever knew.

"As I began to grow old myself, I came to a better realization of what these old songs meant to my parents and began working on my collection in real earnest, cheered on by the thought of how much happiness it would give them if they could know."

See and hear the sheet music by clicking here.