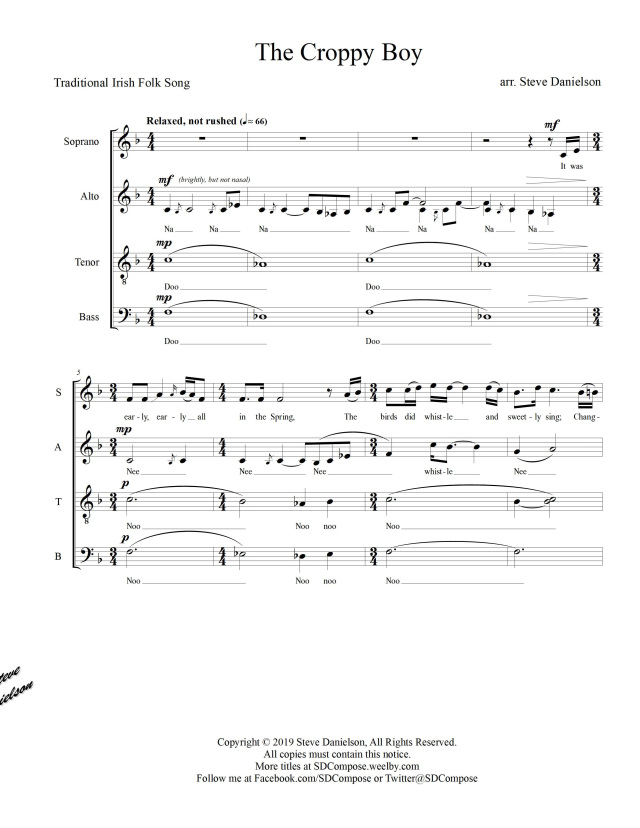 The Croppy Boy takes place during the Irish uprising of 1798. The rebels, inspired by the French Revolutionaries, cropped their hair short, thus earning the nickname "croppies."The bulk of the fighting happened in Wexford Town. In this song, a young rebel is captured and taken before Lord Cornwallis (Cornwall in the song), commander of the British forces. He is sentenced and sent to Duncannon, a government prison on the Wexford side of the Waterford Harbor, to await his sad fate. The green he wears is a symbol of Irish nationalism and for refusing to denounce the "green," he is charged with treason, a capital crime.

This is a popular Irish folk song which can be found in many sources and with varying tunes. This arrangement is a conglomeration of five of these variations. Each was written in triple meter and with a similar rhythmic impetus so combining them creates a seamless setting.

For further study, the melodies can be found in the following sources:

Verse 1 and 3, A Heritage of Songs by Carrie Grover, Norwood Editions, 1973

Verse 2, The Voice of the People, Ed. by Michael Mulcahy and Marie Fitzgibbon, O'Brien Press, 1982

Using a comparison of the lyrics of all the versions (12 possible verses), a new set of lyrics was created melding elements from all five variations.

Hear and see the music by clicking here!